My Mom had her 70th birthday this last week and was once again the recipient of “The Card.”  It’s a tradition between my Mom and my Aunt that is decades old.  One sent the other a birthday card that had an implication that the card was recycled.  The other, thinking they were being coy about the recycling reference, saved the card until the next birthday. So on, and so on for decades.  The card started to fall apart, so they created a more permanent Linus cardholder, but continued writing birthday notes year after year.  The card got heavier and heavier to send so there are occasional gaps in the years where they agreed to stop sending the card in an effort to save on postage.  And when they were least expecting it…the card showed up again on a birthday.

Much like “The Card” between my mom and her sister, Iron Porch has a smacking doll that gets additions year after year.  The doll is sent between Erin and me when the other is least expecting it.  The additions are hysterical to us…and probably only us.  There’s a crazy-ill-fitting-camo dress, a little pink kitty cat, a yellow purse filled with memorabilia, a hard hat from when we went to Florida after Hurricane Michael, and recently added a COVID-19 mask of protection.

While I thought that my mom and I had this super-secret transfer between co-conspirators, I recently was told by a dear friend at church that she also had a back and forth gift.  One year at a white elephant event she battled another gal for a candy dish with cinnamon candies.  She lost.  But received it soon after from the winner as a gift.  They passed it back and forth as wedding gifts and other marked occasions multiple times. I didn’t ask her, but I assume they added new candy each time they passed the gift.

I present to you three examples of women passing a gift back and forth.  Occasion to occasion.  Year after year.  All in a means to acknowledge a special relationship and have detailed memories associated with a particular object (ie: card, doll, or candy dish).

Instead of the occasion by occasion sharing of a tangible item, we shared a piece of God each day? What if day by day, we shared a prayer with those closest to us? What if we shared a scripture with one another? What if it was simply a smile or a kind word?

What if we made each other a priority in an eternal way?

Scripture gives us a model of friendship, not between two women, but rather two men: Jonathan and David.  Jonathan was heir to the throne of Israel, as his father was King Saul.  In 1 Samuel 14: 6-15, we see that he is a man of action and ready to challenge the Philistines from a military perspective.  The Israelites, and specifically Saul, were terrified of the mounting Philistine army and the giant, Goliath, who was sent in to end the conflict.

And then a shepherd boy shows up and takes the challenge (hence the story of David and Goliath in 1 Samuel 17).  At that point, it’s easy for us to see how the friendship between David and Jonathan blossomed. They both acted and had courage despite the odds being against them.  They both had faith in God’s power and experienced deliverance in battle.  They were great leaders with integrity and loyalty.

In 1 Samuel 18:1-4 (NASB) it states, “Now it came about when he had finished speaking to Saul, that the soul of Jonathan was knit to the soul of David, and Jonathan loved him as himself. Saul took him that day and did not let him return to his father’s house. Then Jonathan made a covenant with David because he loved his as himself. Jonathan stripped himself of the rode that was on him and gave it to David, with his armor, including his sword and his bow and his belt.”

True friendship with true giving and with an eternal impact.  Back and forth, year after year, occasion after occasion…or an acknowledgment of God’s work in their lives.

From the Iron Porch, I pray that you each have some type of “Back & Forth Gift” this week! 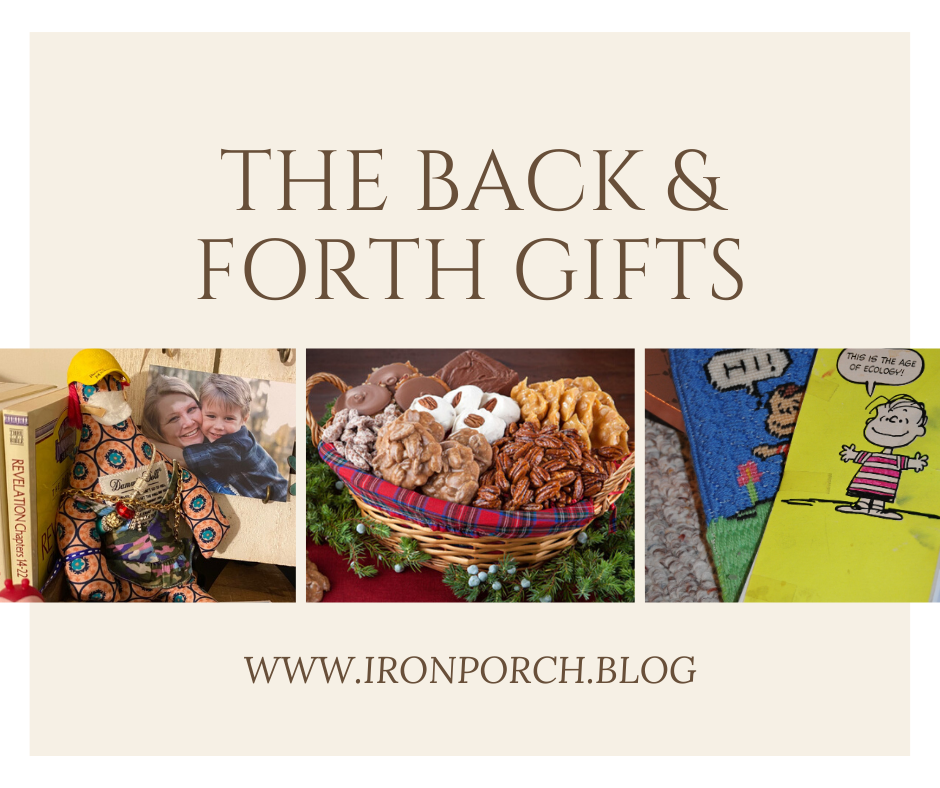 I have been described a straightforward speaker with engaging humor and practical approaches to life. My passion is to speak, write, and encourage women in relevant ways that allows them to grow in their relationship with Christ, their families, and their friends. In January 2018, I co-founded Iron Porch Ministries with my best friend, Erin Petersen, as a mechanism for women to have space to “sharpen” one another based on Proverbs 27:17. I am a retired Air Force veteran, having served 25 years. I've been married for six years and am a mom to son, Kambell and step-mom to daughter, Kiyana. My hobbies include reading, photography and scrapbooking, but I spend a fair amount of time on the “Shade-Farmette” taking care of the chickens, ducks, pond and garden. While I was born in Wisconsin (Go Pack Go!), raised in Oregon, and lived all over the world as a military member, I now call Alabama home. View all posts by Emily Shade

2 thoughts on “The Back & Forth Gifts”