I never believed in Santa as a real person.  From the time I was little, my parents taught me Santa was make-believe and a fun game that everyone played around Christmas.  Their explanation was that they wanted me to believe in Jesus, who was intangible and unseen with human eyes.  If I later found out Santa wasn’t real after believing he was, would I also question the existence of Jesus?

It worked for our family and was my game plan for when I had my own children.

Until I was introduced to an adorable 2-year-old who I would later adopt.  The issue?  He already had been told that Santa was real.  He was “all-in” on the fantasy.  He still is as a 3rd grader.  How was I going to strip him of that belief when he’d already had so much turmoil and loss in his short life?

This is probably his last year believing in Santa as a real person. He has started to ask questions about the practicality of delivering gifts around the world. He’s letting us know there are some kids in his class that don’t believe in Santa. He’s paying attention to movies more and is questioning how Buddy the Elf fixes the sleigh or Tim Allen becomes Santa after falling off the roof.

He’s asking about if I believe in Santa.

I’m verbally bobbing and weaving; not lying, but definitely not telling him the truth.  I’m in a grey area that has me super worried about how he’ll take the news that Santa isn’t real.  Will he resent us for letting him believe? Will he accept that it’s a “game” everyone plays?

But most important to me, how will he maintain his belief in Jesus when Santa is no longer a real dude?  I keep coming back to Proverbs 22:6 “Train up a child in the way he should go, And when he is old he will not depart from it.” (NKJV).  As a Christian parent, I’m doing my very best to raise him up in the way he should go, but frankly, the Santa dilemma has me concerned.

This is the newest word that is front and center on my prayer board.  It’s on the cover of my prayer journal. It’s a post-it on my dashboard.

It has become my single word prayer over the last week.  I’m praying with all my might that this little guy will have true and wholehearted belief in Jesus Christ as his Savior.  That the news of Santa will not de-rail that child-like faith he possesses.  I pray that he holds fast to his belief.

If you have time this week, please join me on the porch praying for all the littles of the world to know Jesus…to have belief in Christ…to balance faith with earthly knowledge.

Father God, we are so very grateful for the gift of your Son as our Savior.  Please let the children of the world have an opportunity to accept this gift and to know your love.  Let their belief in you be bigger and bolder than the beliefs in worldly concepts, like Santa.  We pray these things in your holy name. Amen. 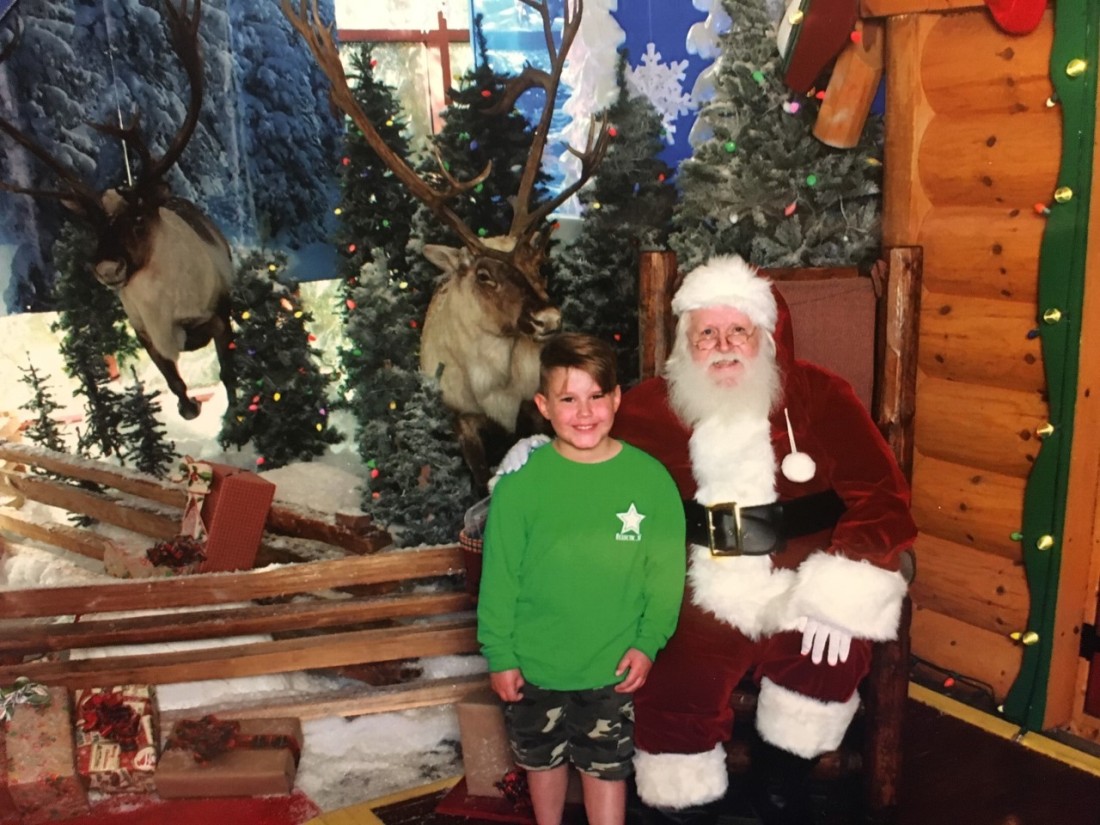 I have been described a straightforward speaker with engaging humor and practical approaches to life. My passion is to speak, write, and encourage women in relevant ways that allows them to grow in their relationship with Christ, their families, and their friends. In January 2018, I co-founded Iron Porch Ministries with my best friend, Erin Petersen, as a mechanism for women to have space to “sharpen” one another based on Proverbs 27:17. I am a retired Air Force veteran, having served 25 years. I've been married for six years and am a mom to son, Kambell and step-mom to daughter, Kiyana. My hobbies include reading, photography and scrapbooking, but I spend a fair amount of time on the “Shade-Farmette” taking care of the chickens, ducks, pond and garden. While I was born in Wisconsin (Go Pack Go!), raised in Oregon, and lived all over the world as a military member, I now call Alabama home. View all posts by Emily Shade